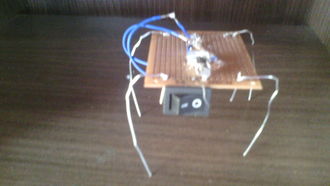 This was my very first experience with electronics and different components of it. Making a spider robot on the very first day was a very great exposure to the wide field of electronics. We were given some basic components like a PCB, a switch, a 3 voltage disc battery and its holder, four paper clips and a small motor and were told to make a moving robot.

We had to solder the motor the battery holder and the switch to each other and to the PCB. Soldering was a very interesting but a very difficult task as I had never done it before. It was a very task to actually make the proper connections and solder it with the hot soldering iron. But at the end it was a very wonderful and fascinating project.

The logic was simple as to how it will work when the switch is on it will complete the connection and let the current flow from the battery to the motor and because of the vibrations from the motor the robot would move forward.

It din't come out as I had expected it to be but it was okay I had tried and I was happy for my first experience. 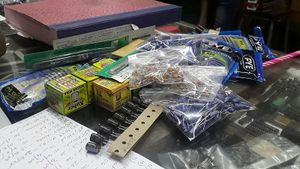 It was surely a hectic and tiring day to go all the way till SP Road and buy all the list of components that were given to us. The whole lane consisted of electronics stores. In all it was a very interesting and new experience for us to go and exactly see what the shopkeeper is giving us and how to count it and buy for so many people. We were the few people who were waiting till the end so it became a bit mentally and physically exhausting after a certain point. We have to wait till the seller arranged for all the components from our list one by one.

There were a lot of shops in the lane which almost sold the same things but there were very few shops where we would get all the components from our list so we had to roam and find a shop where we found all the things. I also learnt a lot by observing around the shop ho the things were kept in order and all the things set in a specific order and how they work effectively.

Making a lemon battery to light a led